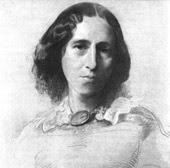 Robert Evans, father of Mary Ann, the future George Eliot, himself  possessed of brains that had enabled him to rise above his circumstances, recognised and nurtured that same intelligence in his daughter. Like many fathers before and after him, he found out that a girl with brains is apt to think for herself. Mary Ann found out that thinking for oneself – especially as a girl in a man’s world – brings trouble. But she also found congenial, freethinking friends on the road that eventually took her to London. Mary Ann was left behind: she emerged as Marian Evans, brilliant journalist and in fact, if not in name, editor of the intellectual Westminster Review. George Henry Lewes, married to Agnes Jervis, found out, like many a husband before and after him, that a ’free marriage’ works better in theory than in practice. When his wife started having children with his friend and colleague Thornton Hunt, he generously registered the first and second as his own. By doing so, he forfeited the possibility of getting a divorce. It did not matter to him. In 1851, and in the same month he registered the second child, he first met Marian Evans. Soon it did matter. But now it was too late. Sometime between this first meeting and the 20th of July, 1854, the two had become lovers. On this day, they left London together, on a journey to Germany where Lewes intended to collect material for his projected biography of Goethe. This step put Marian Evans, not legally his wife, in a most precarious situation. Neither of them could foresee that their life together was to end only with his death, and her notes and writings at the time not only register her intense happiness with Lewes, but also her doubts and fears. We can sense this anxiety in the entry in her diary on the day she left London: »July 20th 1854 – I said a last farewell to Cambridge street this morning and found myself on board the Ravensbourne, bound for Antwerp about 1/2 an hour earlier than a sensible person would have been aboard, and in consequence I had 20 minutes of terrible fear lest something should have delayed G. But before long I saw his welcome face looking for me over the porter’s head, and all was well.«

Every effort has been made to acknowledge correctly and contact the source and/or copyright holder of each text, picture and sound material, and we apologise for any unintentional errors or omissions, which will be corrected if brought to our notice.

of this blog by Bob Muscott, Karl-Heinz & Mara Mauermann with support by OPT